Tomato: How to store and cook tomatoes, History and characteristics, Calories and nutrition facts about tomatoes

How to cook the tomato, how to preserve it, in which seasons to taste it for an optimal flavour... discover all the secrets of this delicious fruit-vegetable.

History and characteristics of the tomato

Originally from Central America, the arrived in Europe in the 16th century. Fruit of the solanaceae family, it was long suspected of toxicity: it was used until the 18th century to repel mosquitoes or as an ornamental plant. Formerly called "love apple" and "golden apple" (the name is preserved in Italian pomodoro), it first gained the trust of Mediterranean people in the form of sauces and coulis before becoming the emblem of southern kitchens from the 1920s onwards.

From yellow to red to green, it can now be found all year round on our markets, although its peak season is from May to October. It comes in many forms:

In France, 550,000 tons of "de bouche" tomatoes are grown, mainly in Brittany, the Loire Valley, the North-East and the Mediterranean. In 2003, the French consumed just over 13 kg per person.

There are several thousand varieties of tomatoes. It is a fruit that is particularly easy to grow since it can be planted in pots as well as in the ground, and it adapts to all climates. Complete file for successful cultivation.

In which season to eat tomatoes

The is eaten during the months of August, September and October. It is eaten in July.

Calories and nutrition facts about tomatoes

Composed of almost 95% water, tomatoes are ideal for keeping your figure in shape. In addition, it has a low caloric intake (15 kcal/100 g) and promotes the elimination of toxins. It is also an excellent source of vitamin C (18 mg/100 g) as well as provitamin A or carotene (0.6 mg/100 g) and vitamin E (1 mg/100 g) with antioxidant properties, which stimulate the body's defences.

In addition, studies show its preventive action against the development of certain cancers, particularly prostate and lung cancer, thanks to its high lycopene content, which gives it its beautiful red colour. In addition, you should know that cooked tomatoes, especially in a little oil, contain significantly more lycopene than raw tomatoes. Therefore, it is preferable to use sauces, coulis, juices and even ketchup to get the most out of its benefits. It is also very rich in minerals and trace elements, particularly potassium (226 mg/100 g), which contributes to the proper functioning of the kidneys. Its phosphorus, calcium and magnesium content is also interesting.

Its skin and seeds contain fibres (1.2 g/100 g) which stimulate intestinal transit. Be careful, however, because they are often difficult to digest and can be irritating for fragile intestines. In this case, you only need to taste the pulp and juice. Finally, don't hesitate to eat tomatoes at the beginning of the meal to take advantage of its aperitif virtues. Indeed, its acidulous note stimulates digestive secretions and prepares for the good assimilation of the meal. 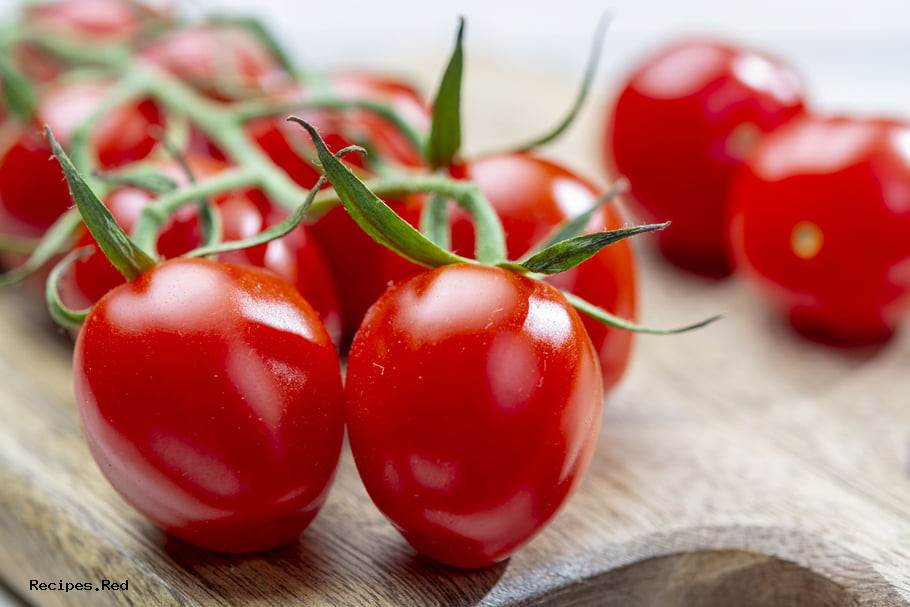 Grape, cherry, dried, in sauce... Rich in lycopene and vitamins, the has many benefits for health, skin and heart and is never to be banished, even if you're on a diet!

How to choose the

Choose a fairly firm with a smooth, evenly coloured skin. Depending on the variety, they are more or less fleshy and juicy. The real guarantee of quality is the smell, which is very fragrant.

How to store and cook tomatoes

Store at room temperature in a fruit basket or on a plate. Avoid the refrigerator, which makes it lose its flavour but still keeps it safely for about 10 days. A slightly green continues to ripen in a warm place.

All year round, canned tomatoes (whole, peeled or crushed, in concentrate) are also available, ideal for making sauces and coulis. Dried and preserved in oil, it adds flavour and spice to dishes such as pasta and cakes. Slipped into a sandwich, it will brighten up your lunch breaks.

Consume it after washing it and removing its stalk. To easily remove its skin, simply immerse it in boiling water for a few seconds. It can be removed in a jiffy by gently pressing it into the palm of your hand once it has been cut in half.

How to cook and enjoy tomatoes

If the bunch is delicious raw, in a salad, "croque-au-sel", it is the round one that is the most suitable to be stuffed, raw or cooked, with rice, fresh cheese (goat's cheese, ricotta cheese), sausage meat, tuna... after having emptied it and made it disgorge (slightly salted and turned over on a cloth).

The elongated one, like the olivette, can be savoured in coulis and sauces, adding a spoonful of during cooking to soften its acidic side, as an accompaniment to pasta dishes, meat dishes or on pizzas. It colours quiches, pies and other clafoutis wonderfully. Marry it with garlic, herbs such as oregano or basil, capers, olives, or anchovies to enhance its flavour. For gratins and ratatouilles, ribbed tomatoes, like beef hearts, offer the necessary cooking resistance, which also makes them the queen of barbecues.

As an aperitif, think about colouring your buffet with small cherry tomatoes, sweet and sour, or cocktail tomatoes, to be crunched, at a lower calorie cost, plain, "croque-au-sel" or dipped in a creamy sauce.

Red or green, tomatoes can also be used to make original jams.

Even more unexpected but just as appreciated, sorbet and granita are a summer dessert that is as fresh as it is light.